When I was still in my twenties, I heard the problem of Franck’s Violin sonata. The feeling of the first 3 movements is quite different from that of 4th movement in spite of his cyclic form to achieve uniformity. I felt maybe so, because I agreed the difference of the feeling, but I didn’t think it a problem.

Form of the 1st movement is A-A’, However, It would be suitable to understand this movement as  sonata form without a development section since the first theme is meticulously worked on the basic motive M1, and second theme is also carefully set as we usually see in sonata form.

First Movement: Allegretto moderato
4 measure introduction presents a motive M1 that will lead all movements. In the introduction, the first measure is especially impressive. M1 give a sense of asking or yearning for something
Fig.1 Mes.1

As shown below Fig.2, Main theme of 1st movement is introduced by the violin. The theme has two M1s in the beginning and at the end of phrase. It starts with a quiet inquiry and ends with a quieter inquiry. This phrase is repeated twice, but harmony changes in the last part and connected to the next phrase.

Next phrase in Fig.3 is made by reversed M1, and it ends vaguely trying to answer the inquiry.

[Note] Phrase from measure 13 is the same as Fig.2 except the first note that is transposed by one octave. It looks different as whole melody is transposed.

Theme1 section is from measure 11 to 32, and I think the good performance of the first theme (5-12) is very difficult because this phrase is the first phrase for violin to play, and it may give you strong pressure. The phrase of Fig.2 rises to fis’’ and goes down to fis’. Do you like cresc., decresc. or else? How do you want to play last b-d"? Meaning of this theme in the words, it might be “Can I do this? Do you mind?

After the long song played by the violin, piano appears with graceful second theme. Comparing to the main theme, this melody has clearer character and positive. This melody could be related to the basic motive M1 by the g"-h' at the last beat of measure 32. But It sounds positive as h’ is transposed down by an octave.

I feel the gravity center of this theme is g"-h'-h'-a starting from 3rd beat of measure 32. This second theme part develops the idea presented vaguely by the violin.
Fig.4 Mes.31

The second theme is repeated twice for confirmation. Second one is beautifully ornamented by arpeggio which emphasizes the active and positive character of the theme. Then violin comes back to sing the first theme together. This duet lasts 4 measures in their zenith and fades out gradually.
As the violin plays a reflective phrase, happy atmosphere turns into a stoic mood. It is impressive that piano still repeat M1 in measure 57 and 58 in spite of the change of mood.
Motive shown in Fig.5 abruptly appears as a closing phrase of first part or a preposition if it is a sonata form. This phrase, derived from M1, sounds rough giving a feeling of firm rejection.
Fig.5 Mes.58

Recapture. Section
Recapture section is basically the same as Exposition. The violin presents Theme1 section and the piano plays Thme2 twice from measure 88, but short phrase by M1 is inserted. After the second theme there is some modulation. Fig6. Shows the outline of Recapture section.楽譜６ 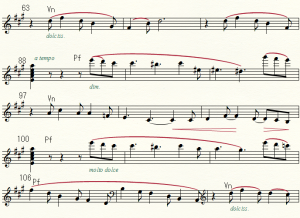